Below is a photo of a dedicated food court in Ipoh, my hometown. By ‘dedicated’ I mean that it’s not attached to a shopping mall – the GP Food Court is a destination in itself. The building sports ultra-high ceilings that permit an extra floor above. This space houses a gym, though I can’t imagine how anyone would exercise in the midst of such tempting smells. Which may explain why I’ve yet to see the machines upstairs being used.

You can smell the food court before you actually enter, thanks to massive doorways in every direction. As if the aroma of so much food cooking wasn’t bound to waft upwards and outwards anyway, at the GP Food Court there are giant fans to aid this drift. The fans here really are enormous. You can glimpse an example above, on the top edge of the photograph. They swing at speed, too, though you can’t see this: you’ll have to take my word for it!

Enough to Give You a Headache

This is the selection at just one stall. Notwithstanding the neon sign advertising ‘Rice’, this stall also serves noodles, in case you don’t fancy rice. It’s a well-known fact that you can’t serve rice and noodles on their own – you need things to eat them with  – and this stallholder is thoughtfully offering a panoply of dishes: braised, fried, boiled, double-boiled (all right, I made that up, though I imagine that they would if they could). There are raw dishes too, in the form of salads.

The sheer amount of choice can induce a headache. This is what happens to my partner; on each and every trip to Malaysia there’s always a first time in a food court and it’s as if she has never seen anything like it before. She’s overwhelmed, her eyes don’t know where to focus and her brain stops making decisions. She opts instead for the one or two dishes she knows – and never tries anything else. 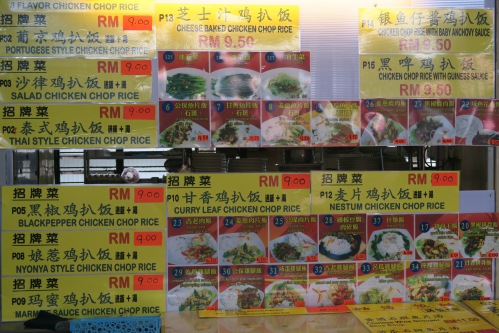 Malaysians, on the other hand, are so blasé about food choice that stallholders have to be inventive. Ever tried Chicken Chop Rice with Guinness Sauce? Me neither. There’s also Portuguese Style Chicken Chop Rice on the top left hand side – a nod to our colonial history.

Most people know Malaysia as a British colony, but the Portuguese were actually here before them, followed by the Dutch. The latter two powers only conquered Malacca, a beautiful and very historical port town south of Kuala Lumpur. Our colonial past would explain why Cheese Baked Chicken Chop Rice is on this menu – cheese is definitely not Malaysian.

You may also notice that the signboards have Chinese ideograms and English words. This is because the GP Food Court is not halal, you see, which means that its patrons are largely Chinese and Indian. The Malay populace – who by law have to be Muslim in Malaysia – would be frowned on if they entered a non-halal food court – not frowned on by us, but by Malaysia’s religious officials and the religious police among its citizenry. Who said food couldn’t be a political tool?

Nonetheless, there are (for the moment) still Malay vendors selling food inside Malaysia’s non-halal eating places, including at the GP Food Court. They usually specialise in satay – a traditional Malay dish of meat that’s diced and marinated, set on skewers and then grilled over a charcoal flame fanned by palm leaves. Satay is eaten with a rich and deliciously spicy peanut sauce. The woman satay seller in the GP Food Court owns satay stalls in two other food courts – and we eat at all three (I love her satay).

To cleanse the palate, there’s also fruit at the GP Food Court. Not just any fruit, but imported fruit. In England or France, a trader would proudly proclaim his fruit as being British or French, but we in Malaysia still have the whiff of a complex. The subtext from this stallholder’s sign is that the fruit must be good, since it’s imported.

There are thousands of food courts like this all over Malaysia. There are also halal food courts, of course. For instance, the food courts inside Malaysia’s shopping malls are all halal – because only hawkers offering halal food can gain operating licences there. Whether halal or non-halal, whether located in Ipoh, Kuala Lumpur, Penang or Malacca, on each of my visits in the previous ten years, every food court I went to was packed. But what people eat and how much they eat has changed – because times are now tough in Malaysia.

So tough, in fact, that even leading entertainers are speaking up. This is unprecedented. Only last week jazz singer, Sheila Majid, tweeted about Malaysia’s cost of living while a popular actress, Nur Fathia Latiff, criticised the government. Not surprisingly, both have been told to shut up.

None of this should affect visitors, however: the country remains stunning, the people welcoming, the food fabulous. Even on my most recent trip the meals I had ranged from good to superb: it’s hard to have a terrible meal in Malaysia. If you ever make it there, I would definitely recommend a visit to a dedicated food court. Be dazzled; be spoilt for choice. Do what Malaysians do: let your nose and eyes guide you. If the food smells good and there’s a queue, chances are, you won’t regret it.

One response to “Ruminations on Food 2: A Malaysian Food Court”