The blurb had advertised Totleigh Barton as a ‘thatched, pre-Domesday manor house’. On looking up Wikipedia, I discovered that the Domesday Book was completed in 1086. Did I say 1086? Even modern British houses are cold, I find, especially their bathrooms. What was a house with a thatched roof built before 1086 going to be like? And in November… 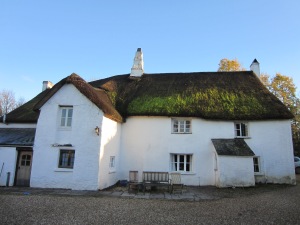 Worse was what I had actually enrolled to do: learn new techniques for short stories, and actually write them. Short stories were not ‘my’ genre, I told myself, while wondering what the hell I was doing there.

But it was too late to turn back. Not least because we were in the middle of nowhere. Literally. Having tried to find Totleigh Barton on googlemaps beforehand, I realised we would be heading for a dot in the middle of an ocean of fields. The nearest town, Sheepwash, was two miles away. There was no wi-fi, not even mobile reception. To get mobile reception, you had to walk up a steep hill – which I couldn’t do because I was still using a crutch, thanks to an ankle sprain six weeks previously.

Then, there was the rain. We were in Devon after all, where rain falls in biblical proportions.

I heard it in my slumber and would wake up with ready-made sentences. A short story I wrote began like this: “Winds like the dogs of Cantelabra howled through the night. Rain dropped in pellets, hitting the window panes of Sheepwash. The sheep in their pens were soaked; their clothes turned into mink, pink like the rain.”

These aren’t my finest lines, but they are an example of what we were encouraged to do: let our imagination meander anywhere it cared to go . There are no rules in the short story, we were told. We gave ourselves permission to write whatever we wanted, in any way we wanted. Otherwise, I would never in a million years have come up with the dogs of Cantelabra or sheep in pink mink.

Our tutors, Tania Hershman and Adam Marek, were extraordinary. The whole course was extraordinary, as you would expect from Arvon, the UK’s premier writing foundation, which has perfected its recipe over many years. Our tutors’ seemingly crazy exercises undoubtedly produced results, because within ten minutes of our first session, we had all written a piece of flash fiction (a very short story of generally fewer than 500 words).

Equally important, we had great fun. So much so that on the last morning, when we were supposed to have free time, we asked for more writing exercises. How masochistic is that? We were simply hooked – not even the cold of the beautifully restored barn could stop us. When Tania and Adam complied, everyone came. We stretched out on sofas in the barn, then after a break, moved into the mediaeval dining room to huddle along benches, our shoulders hunched over a banqueting table the celebrity chef Heston Blumenthal would surely covet (see photograph below from the Arvon website, reproduced with their kind permission).

So just why had I been so afraid of going on an Arvon course?

A clue came in the middle of the week. That evening, we had a guest writer to visit. We were sitting at the mediaeval dining table, warmed by sips of wine and a roaring fire, when Oliver Meek, who with his wife Claire Berliner runs Totleigh Barton, mentioned that Arvon was thinking of ways to attract a more diverse audience. Arvon, he said, wanted to reach out into new communities. To do this, it had expanded its courses to certain cities; ethnic minorities, it seemed, were intimidated by secluded rural centres. As Oliver spoke, something clicked in my brain. I identified immediately with his words, which may sound strange to some. Fear of the countryside? Why would anyone be wary of sheep and rolling fields?

Only much later, after I had left the calm of Devon, was I able to reflect on this. I too, had been put off by where Totleigh Barton is situated. Though Sheepwash is beautiful, my mind associates seclusion with few people, all very similar but different from me, whose view is limited to a tiny piece of the world. I expect danger. And hostility. I didn’t fancy being stuck in such a place with strangers, unable to escape. Sweeping generalisations these may be, but they are the things we cannot rationalise away. Or even articulate to ourselves: until Oliver spoke, I wasn’t fully aware of what my fears had been about.

Such baggage may be stereotype and pre-conception, but it has power. I nearly didn’t book myself onto this Arvon course. And if I, with my privileged Oxford and City background, had been anxious, how much more would others be.

I’m so glad Arvon wants to reach beyond its traditional catchment. Oliver’s words made me stupidly happy. I walked on a high all evening. Perhaps it was also the Dunmore effect: the fabulous Helen Dunmore, prize-winning poet and novelist who spoke to us after dinner, is nothing if not breathtakingly eloquent. She could put anyone on a cloud. If you ever have a chance to hear her speak, grab it.

For anyone reading this who is hesitating over an Arvon course, especially if you come from an ethnic minority group – don’t be afraid, just do it. The magic will come. Arvon cares about everyone who comes through its doors. Its formula works. But you have to be open, and be prepared to give of yourself.

There was something in the air over Totleigh Barton, a magic which came precisely from being secluded in a beautiful place with others who loved words and stories. There was another kind of magic – the kind that comes from being cared for all day long. I had never expected to enjoy it so much. Even sleeping in a building which had once been home to pigs seemed exotic (see photograph below of my bedroom in the Pig Stiles, with windows on the other side overlooking green fields).