Snapshots – 3. Day with a Special Chef

I held my breath. On turning the bright pink mould upside down and giving it a gentle tap, I could barely believe that what I had just fashioned with my fingers would fall out. Yet fall out it did, plopping into my open palm without fuss, its shape intact. You can see the look of utter surprise on my face. 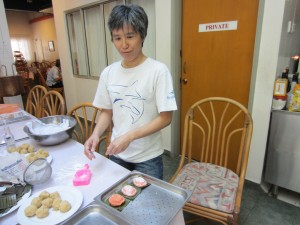 I had finally made my first angkoo.

If you’re not from south-east Asia, you may well ask what angkoo is and why on earth I would want to make it.

In the photograph on the right, angkoos are the orange-red mounds resting on the tray at the bottom. Each angkoo comprises a glutinous rice skin, coloured orange-red and filled with steamed mung beans. Not your cup of tea? You may change your mind once you’ve tasted one: angkoos are sweet and delightfully aromatic, with lots of thick coconut milk and sugar.

Why this interest in angkoo? Well, angkoo is a well-known type of ‘cake’ or kueh made by the Nyonyas. It also has symbolic significance, because angkoos were traditionally given by a Nyonya couple to their family and friends when a new baby reached its first month. Angkoo features at key moments in my novel because of this symbolism. It has additional import for my main character, because it is while making angkoo one day that she finally realises what being a Nyonya actually means for her.

Because of the role angkoo plays in my novel, I’ve had to follow its recipe in detail, trying to imagine what it would have been like making angkoo in a sweaty olden kitchen. This week, I decided it was time to consult an expert.

Who better than my aunt Lorna, who comes from multiple lines of Nyonyas? My aunt’s grandmother was my Great Grandmother, a fierce Nyonya woman, and my aunt’s mother was also a Nyonya descendant of many generations. Aunt Lorna runs Sri Nyonya, one of the best-known restaurants in Petaling Jaya specialising in Nyonya cuisine. (Petaling Jaya, PJ to locals, is close to Malaysia’s capital of Kuala Lumpur).

I was nervous before we started, uncertain how the day would go. Everyone had told me beforehand what hard work Nyonya cooking was, especially the ‘cakes’ or kueh I wished to learn.

For the first few minutes, I stood watching my aunt in awe. By the time the photograph with my stunned face was taken, I had relaxed, because most of the arduous work had been done. I call it arduous, yet it was easier than in the days when my main character was making her angkoos. She would have had to grind her own glutinous rice flour by hand; we bought ours in ready-made packets. She would also have had to chop firewood for the stove and use bellows to control the strength of the fire.

Despite our modern conveniences, I can’t say the work was easy. There was much mixing and kneading and steaming. Even though aunt Lorna had steamed and crushed the mung beans the day before, it still took us a couple of hours to make thirty two angkoos.

Each angkoo has to be made individually, which means that the amounts for every skin and ball of filling have to be separately weighed. Only thereafter could the fun begin: the shaping of each angkoo into its mould and the ‘knocking out’ of the angkoo.

From the photographs, it’s obvious I had to concentrate hard. Aunt Lorna showed me how to flatten the orange-red angkoo skin on my palm, making sure the skin became thin but at the same time, was thick enough to hold its filling. When the skin was properly prepared, I placed a ball of the mung bean filling onto it and slowly pulled at the sides of the skin to close the wrapped ball up. Then, I pushed the ball into an intricately designed mould.

The traditional moulds were wooden, but we used a bright pink plastic mould with the characteristic tortoise pattern inscribed. I was told that if I coated the mould properly with glutinous rice flour, the angkoo should simply drop out when the mould was turned over and given a soft tap. Although I understood the theory, it still felt like a small miracle whenever an angkoo fell out with no problem. I always breathed a sigh of relief.

My angkoos tended to have wobbly sides, not the clean lines of my aunt’s expert hands, but that didn’t matter, because they all tasted wonderful once they had been steamed. They were a perfect shade of orange-red too – thanks entirely to my aunt, who had mixed in the colouring in judicious proportions.

It was only afterwards, in the quiet of the night, that I became aware of the emotions I must have carried during the day. I remembered the joy I felt as we, my aunt and her helper Theresa and I, chatted happily while knocking angkoos out. I imagined my main character doing the same a hundred years ago in her old-fashioned kitchen. She would also have been standing with other women, surrounded by the sound of chattering and familiar aromas, of garlic frying and pandanus leaf steaming. It was in the midst of such activity that she learnt to appreciate her heritage.

For me, what began as a research adventure turned into an intense, highly personal event. Making angkoo with aunt Lorna was a privilege, an experience I will never forget.

3 responses to “Snapshots – 3. Day with a Special Chef”