Hello again, it’s great to be back! I know I’ve been away for a while. I promise I’ve been busy! At one point I was writing so many publicity articles that everything blurred, and I didn’t know my right hand from my left. In between radio interviews – the highlight of which was my appearance on the BBC World Service – and speaking engagements, I was mad enough to carry on writing my third novel.

Thankfully there was a spurt of rest, when I took a short trip to Malaysia for a family celebration. That’s where the idea for this series of blog-posts came from – because as usual, I ate copious amounts. And with the trip lasting only 10 days, the eating was intense.

In fact, after 6 nights of dining out like crazy my partner announced: ‘You haven’t seen drama until you’ve watched a group of Malaysian-Chinese discussing menu choices.’

When I thought about it, I realised she had a point. There’s always a kerfuffle at the start, when we’re still trying to decide what to order. In a Malaysian-Chinese restaurant you don’t place your order with an ordinary mortal, such as a waiter or waitress, no! You summon the head waitress herself. This head waitress is usually a middle-aged woman who has worked her way up the ranks. She knows everything about the menu and how things should be cooked, and makes recommendations accordingly.

Of course, diners around the table – who are invariably food connoisseurs – will have their own ideas. The result is operatic drama, lasting a good 10 minutes on average, during which we talk about which soup to have, which type of poultry, what fish, should we order another seafood dish or another meat dish, what about vegetables and which ones – all before we’ve even come to the finicky point of how each dish should be cooked.

The discussion takes place in one or other Chinese dialect, in our case Cantonese. This means that the conversation is loud: we Chinese are noisy when we’re excited, and we’re always excited where food is concerned. Everyone around the table chips in, sometimes all at once. Ideas are tossed about and there’s much to-ing and fro-ing, especially when it comes to cooking methods, since the conversation often gets down to precisely how the fish will be steamed. In the heat of those moments, the difference between silver pomfrets and black pomfrets seems a matter of life and death.

It Took Us a Long Time to Choose You!

The conversation is always full of passion, it’s never a competition of egos. Everyone truly wants the best possible version of any dish we’ve ordered – that’s what we’ve gone for, after all. And because there is so much outstanding food in Malaysia, people have lots to say.

Apparently, the two groups who spend most time talking about food are the Malaysians and the French. (A verbal anecdote I heard somewhere.) The French, I’m sure, regard themselves as foodies, but having spent a good chunk of time in France I have news for them: we Malaysians are even bigger foodies. And we love all food – not just Malaysian food.

We’re totally obsessed, you see. I believe that this obsession, for Malaysian-Chinese at least, must stem from some primeval fear of famine. Not so long ago – as recently as my childhood – we would greet one another with ‘Have you eaten yet?’ instead of ‘How are you?’ If you had a full stomach, it was assumed that you were well; how could it be otherwise?

A Queue for Moon Cakes

For us, fear of hunger is ingrained. Even though we now live in Malaysia, a country so fertile that a seed only has to drop to grow, and despite having lived here for several generations, we still behave as if we might starve tomorrow. Because who knows, there might just be a war, right, as happened in When the Future Comes Too Soon?

Therefore, we go to great lengths to discuss what to have for lunch while munching our breakfast, what to eat for dinner before we’ve finished lunch, and so on. Our meals are mapped out days in advance. We will battle traffic and thunderstorm; we will drive miles for the sake of the juiciest mangoes, the freshest fish and the best moon cakes. In case you’re wondering what these look like, the photos below were what the people above queued for.

Moon Cakes: Were They Worth the Wait?

Some street food vendors have become so wealthy, they’ve sent their children to study overseas. This is what my protagonist does in The Woman Who Breathed Two Worlds. One American reader who reviewed the book was sceptical that this could ever happen – she obviously doesn’t know Malaysia.

Potential famine aside, food is wonderful because it’s safe. There’s nothing controversial about satay or fried chicken or soupy noodles. No one will criticise you for posting photos of your lunch on Facebook; in return, you can comment on your friends’ dinner meals and everyone is happy.

If our talented cartoonist, Zunar, stuck to drawing happy scenes of Malaysians chomping through plates of nasi lemak, he wouldn’t be suffering from a travel ban today. At present he can’t even come to London for an upcoming exhibition at the Westminster Reference Library, one that has been organised by the UK’s organisation of professional cartoonists and suitably called Gagged – all because he dares lampoon our esteemed Prime Minister. 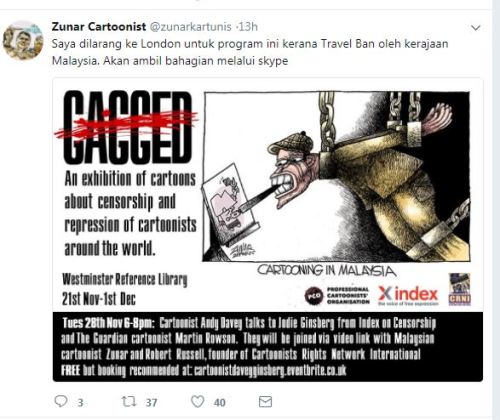 Of course, strong democratic societies were not built by avoiding inconvenient discussion. Sometimes, conflict will result – this can’t be helped. There’s no other way. Democracy is about speaking up and trying to reach accommodation, especially if we disagree with one another. If we don’t find our voices, food itself could become a political tool.