Tan Twan Eng, the Garden of Evening Mists and Memories of War

I’m always on the lookout for writers and artists from Malaysia. I get a particular thrill when a piece of literary or artistic work reflects Malaysians as we are, in the places we know and love. It is rare to come across such work outside Malaysia. So when it happens, and the work then goes on to achieve international recognition, I’m doubly excited!

This is what has happened with Malaysia-born Tan Twan Eng. (Surname: Tan, name: Twan Eng. See my blog-post What’s in a Chinese Name?). His two novels have both been long-listed for the prestigious Man Booker Prize – a remarkable feat. I first heard of him in 2007 when his début novel The Gift of Rain was published in the UK. A former banking colleague had recommended I read it. “It’s beautiful,” he told me. He was right. The Gift of Rain is set on the magical island of Penang, home of sandy beaches and swaying palms. The story in it unfolds in lyrical prose as light as stardust. 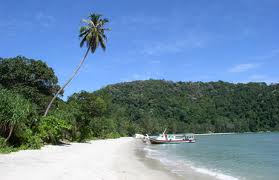 Yet, Tan Twan Eng is not especially known in Malaysia. This is a shame – because his work ripples with themes Malaysians would find interesting.

To begin with, both novels are about the War and its aftermath. For Malaysians, there is but one War: the Second World War – when Malaya was occupied by Japanese forces. This occurred between 1941 and 1945. Roughly seventy years may have passed, but we continue to be affected by the events which took place then. They changed Malaya irrevocably, in ways we are only beginning to explore and understand.

I know I was obsessed with stories from the War era as a child. Whenever my now-dead maternal Grandmother visited, I would beg her to tell me what the War was like. She would sit, as calm as a lake on a still night, and in her deep voice, would tell me things I simply could not imagine. Soldiers rapping on doors and windows, looking for girls and women; men being rounded up, forced to stand in 30+ degree Celsius heat with no water; the screams that could be heard from one of the hospitals in Ipoh, where the Japanese had set up a torture chamber; heads on spikes, on full display at the front gates of Ipoh’s Central Market as a warning to the headstrong. 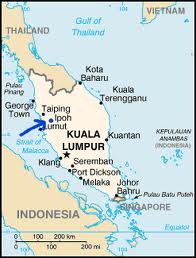 I thought I knew much about the War. Yet, both The Gift of Rain and Garden of Evening Mists, Tan Twan Eng’s latest novel, taught me new things.

For example, I grew up believing that the British Colonial administration had done its very best to defend our country. Not so, according to The Gift of Rain, and my own research confirmed this. Much has been made of the Malayan Campaign. But if we cut through it all, here is the bald fact: Britain largely abandoned us to the Japanese. Japanese forces attacked the north-eastern coast of Malaya first, before swiftly marching across the country: westwards and southwards, over mountains and across jungle our Colonial rulers had said was impenetrable. Yes there were battles – mainly in support of retreat – unlike in Europe, where the British army fought for every inch of ground, to the death. In Malaya, the Colonial troops retreated…and retreated…until they reached the island of Singapore and there was nowhere else to go. At that point, some hopped onto ships bound for Australia, following their women and children. Those who didn’t leave on time were captured when Singapore fell.

I was sorely disappointed by what I learnt. It still rankles today. The only thing I can do with my feelings is to write about what happened.

I imagine Tan Twan Eng must have been similarly affected, though he has worked wonders to weave history into his stories easily. His writing doesn’t feel dense, nor is there any rancour. Amazingly, each novel incorporates a Japanese central character. In Garden of Evening Mists, this happens to be the Emperor’s gardener; in The Gift of Rain, it is an aikido master. Tan himself has first-dan ranking in aikido, and has obviously studied Japanese thinking. He manages to convey some of its Zen-like mystery and beauty through slow, deliberately measured prose, so that even the positioning of stones within a garden becomes pure poetry.

Garden of Evening Mists tells the story of a young Malaysian-Chinese woman, Yun Ling, who goes on to become a lawyer, but who cannot forget the War. After graduating from Cambridge, she takes leave to learn the art of creating a Japanese garden from a man who was the Emperor’s gardener. This fictional garden is located high up in the Malaysian hills, in Cameron Highlands, a dreamy place once shrouded in jungle and mist. It was developed because it reminded British Colonialists of their home. Yun Ling hopes the creation of a garden will be cathartic; instead, it adds layers of intrigue and pain she only comprehends years later. 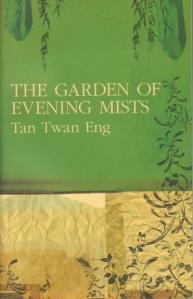 Japanese themes also echo in The Gift of Rain. A Eurasian boy, Philip (Note: By Eurasian, I don’t mean someone from that piece of land known as Eurasia, but a person with one European parent and one Asian parent), who lives in Penang, is befriended by a Japanese man, Endo, before the War. Philip is taught aikido by Endo. Perhaps I read too much into it, but what develops within Philip is a depth of feeling which struck me as homo-erotic. (Though I stress this isn’t a ‘gay’ novel.) Philip learns not only aikido, but also the Japanese language. Then, the Japanese arrive, en masse. You will have to read the book to find out what happens to him, his family and Penang.

Incidentally, there is an explicitly gay character in Garden of Evening Mists. I mention this because it shows me that Tan Twan Eng isn’t afraid of tackling a subject we in Asia prefer to avoid.

Like a good story-teller, Tan Twan Eng folds his own experiences seamlessly into his writing. Having lived in Cape Town for the past few years, he inserted an Afrikaner into his latest book. There are therefore plenty of lekker braais (delicious barbecues) alongside descriptions of Cape Dutch houses and flora. And these are all made to fit into Cameron Highlands!

Reading Tan Twan Eng has inevitably made me reflect on my own work. My current novel deals with an equally dramatic period for Malaya – the years after colonisation but before the War. It was a time of great change: cars and airplanes came to Malaya then, Malayans started to learn English and many families became westernised. There was also a Japanese community in Malaya, whom we later learnt were spies. Many were photographers; one of them features in my novel towards the end, just before the eve of the Japanese invasion, when the matriarch in my story dies.

I had always intended my novel to be the first in a trilogy, with the second in the series focusing on the impact of the War years on a particular family in Ipoh. Reading Garden of Evening Mists has made me realise how much is left to explore…What an incredible life this is.